Last Thursday a Hennepin Avenue layout resolution was passed by the City Council’s Public Works and Infrastructure Committee. This will go before the City Council for a (potentially) final vote this Thursday, August 4th at 9:30 AM. Some are referring to this as a compromise, but that’s not what this resolution represents.

A summary of key points and questions:

We’re glad to see Mayor Frey recommitting to already adopted city policies and goals in this resolution. But it’s not the first time he’s made this commitment: he signed the Transportation Action Plan into law in December 2020. We have little confidence that restating his commitment leads to a different result years from now.

Bus lane hours are still inadequate based on the city’s own data, which shows a high to moderate risk to transit service by converting the bus lane to parking for 18 hours per day. This assessment was withheld from the public, possibly because the data didn’t align with the Frey administration’s preferred outcome.

We know that when she was appointed several months ago, Mayor Frey’s Public Works Director, Margaret Anderson Kelliher, immediately began in her new role by discarding the work of the city’s professional staff, who’d spent the last year-and-a-half making a case for why full-time bus lanes are essential to the success of a $60 million transit upgrade (language that is still accessible on the city’s project website). After the shift in department leadership, there was no evidence-based argument for why the staff recommendation was wrong, or why a new direction was necessary – only gaslighting about how the plan had not actually changed.

We understand why, in the negotiations that produced this agreement, Mayor Frey was asked to sign his name to a promise of data transparency and metrics to be used for future decisions about expanded hours. But we have little confidence that this won’t lead to more data manipulation and denial if the Public Works department continues to be led by Margaret Anderson Kelliher.

This resolution is not a compromise. These are just new promises on top of broken promises – a vague pledge that next time we will live up to our commitments on sustainable, affordable, and equitable transportation.

Note the painful irony that on the same committee agenda where this agreement was announced – relegating bus lanes to parking for 18 hours per day on Hennepin Avenue South – there was a layout approval for a different stretch of Hennepin serving the same E-Line bus rapid transit line. The County’s layout for Hennepin and First Avenues NE was approved with full-time bus lanes.

Our disappointment in this outcome is not to discount the efforts of council members Aisha Chughtai and Andrew Johnson who negotiated the resolution. We believe it really was difficult work getting the Mayor to concede he would live up to his word and conduct his administration in a transparent fashion. Instead, we’re disappointed in the five member minority of the City Council who allowed Mayor Frey’s veto to be the final word.

Update: We’ve learned that the Hennepin Ave layout, including the status of the bus lanes, will be discussed at this Thursday’s (July 28th) meeting of the City Council’s Public Works & Infrastructure Committee (City Hall, 1:30 PM, room 317).

How we got here: Last month, the City Council voted to approve full-time bus lanes on Hennepin. Mayor Frey used his veto power to block it. Shortly after, we learned through a data request that Frey’s Public Works Director was withholding the city’s own data showing that converting the bus lane to parking posed a risk to transit service in the corridor.

What’s next: We’ll have a reaction to what this means when we learn how the street layout has been compromised.

UPDATE: Hennepin Ave is not going to be acted on at tomorrow’s Public Works and Infrastructure Committee. City Council members have decided to delay by at least two weeks to the next scheduled meeting: Thursday July 28th.

Frey administration withheld internal analysis of “risk to transit performance” that would result from converting bus lanes to parking.

As we wait for next Thursday’s meeting (July 14th at 1:30 PM. Update: meeting delayed 2 weeks) of the City Council’s Public Works and Infrastructure Committee – where Hennepin Ave is back on the agenda following Mayor Frey’s veto of full-time bus lanes – we have some news.

Thanks to a data request by interested resident Adam Wysopal, we know that in March, the city’s Public Works Department analyzed the “risk to transit performance” without bus lanes on Hennepin. They found that converting the bus lane to parking posed a moderate to high risk through most of the day, from 6 am to 10 pm. This information comes from an internal presentation. To the best of our knowledge, this information has never been presented to the public or to the City Council as a body.

This should be no surprise. This is why the city’s Public Works staff recommended full-time bus lanes. Why was this information not presented to the public? Why was it withheld from presentations to the City Council two months later?

We know that after four years of public engagement – including a year and a half during which the only options presented to the public included a full-time bus lane – plans for Hennepin Avenue were abruptly changed at the last minute. The city’s professional staff were overruled. There was no public process in developing this new plan and little explanation for the dramatic shift. Now we know that as this change was being made, the city’s own data showed a Hennepin Avenue without bus lanes for 18-20 hours per day posed a moderate to high risk to a $60 million transit project. That information shouldn’t have been withheld.

In addition to this being a question of living up to our city’s equity and sustainability commitments – this is also about whether decisions at city hall are made using data or by manipulating what’s presented to the public and the elected members of the City Council.

Mayor Frey has vetoed full-time bus lanes, but the issue is far from settled. This is still in the hands of the City Council. Call (more impactful!) or email your council member, especially if you or anyone you know lives in wards represented by Andrew Johnson (12) and Emily Koski (11). Johnson is Chair of the Public Works and Infrastructure Committee and has voted to support full-time lanes. Koski is Vice Chair and has voted against. Tell the City Council it’s time for transparency and an honest assessment when Hennepin Avenue comes back to committee on Thursday. 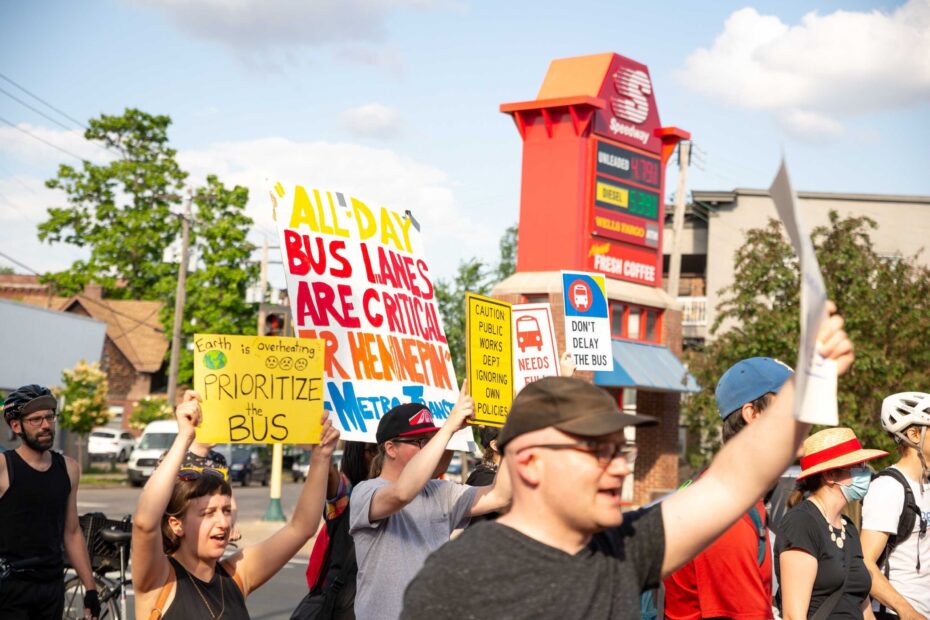 We marched for full-time bus lanes

We took to the street on June 28th to highlight Mayor Frey’s obstruction and the broad community support for full-time bus lanes from day 1. Thank you for coming out!

💛Our thanks to the Star Tribune, Southwest Voices, and WCCO for covering our event! 💛

You know the drill! We need people willing to show up to pack the City Council chambers (Room 317) and hold a sign on Thursday, June 30th at 9:30 AM. Your visible presence is meaningful!

We’ve accomplished so much together over the last year. We’ve built a consensus for a people-centered Hennepin Avenue. We’ve demanded safety for people crossing and biking; faster, more convenient transit; and less chaos for those traveling by car. Hennepin Avenue can be something to be proud of, a place people want to travel and spend time (and money). Along the way we’ve won the support of a clear majority of the Minneapolis City Council and the entire 15 member Minneapolis legislative delegation to the Minnesota House and Senate.

Our elected officials aren’t just responding to the demands of people like you, but to the judgment of the city’s own Public Works staff and Metro Transit. Hennepin Avenue needs a full-time bus lane when the street reopens in 2026. The success of a $60 million rapid transit upgrade is riding on it.

This week is about overriding Mayor Frey’s veto of full-time bus lanes.

Today’s override of the mayor’s bus lane veto failed. That’s the bad news. The good news is we help our 8-5 city council majority. The other good news is this isn’t over. It’s going back to committee in two weeks – July 14. With the potential for a full city council vote on July 21. Council Members Chughtai and Johnson expressed notes of optimism today about reaching a compromise with the Mayor. We will keep you updated.

Thank you to everyone who has continued to show up during this very extended process. We are all very tired, but grateful to have you with us. Your presence at city hall, your voices, the connections we’ve made, have all been essential to the victories we’ve achieved so far.

On Tuesday, June 28th we take to the street to highlight Mayor Frey’s obstruction and the broad community support for full-time bus lanes from day 1. Join us!

The transportation status quo wants us to give up this fight. We’ve had an answer for their obstruction at every step of this process. We won’t stop.

On Friday evening June 17th, Mayor Frey acted to block full-time bus lanes for Hennepin Avenue which the day before had been approved by a vote of the Minneapolis City Council. We are disappointed but undeterred. 51% of local bus riders are people of color. Frey’s action disregards the needs of working class transit riders, adopted city policies, our city’s climate action goals, an outpouring of support from our community, the entire 15-member Minneapolis delegation to the state legislature, the expressed preference of Metro Transit, the recommendation of his own professional Public Works Department staff, and of course a vote of the Minneapolis City Council. We will continue to fight for full-time bus lanes. We want the $60 million E Line bus rapid transit to be successful from day 1 when it begins service on a newly reconstructed Hennepin Ave in 2026.

Actions to take to counter this mayoral veto:

Mayor Frey’s actions should match the transportation policies he says he supports when he’s campaigning.

The full text of Mayor Frey’s veto letter below:

The City Council voted 8-5 today (June 16th) in support of full-time bus lanes for Hennepin Avenue. But this isn’t a done deal. Mayor Frey can use his veto power to block the Hennepin Avenue layout the council just approved. Help protect our big win!

We need people willing to show up to pack the City Council chambers (Room 317) and hold a sign on Thursday, June 16th at 9:30 AM. While we prevailed in committee, the vote of the full council is less certain. There won’t be testimony but your visible presence is meaningful! There will be plenty of signs to choose from. Join us!

Other ways to help:
💛 Contact your council member and Mayor Frey.