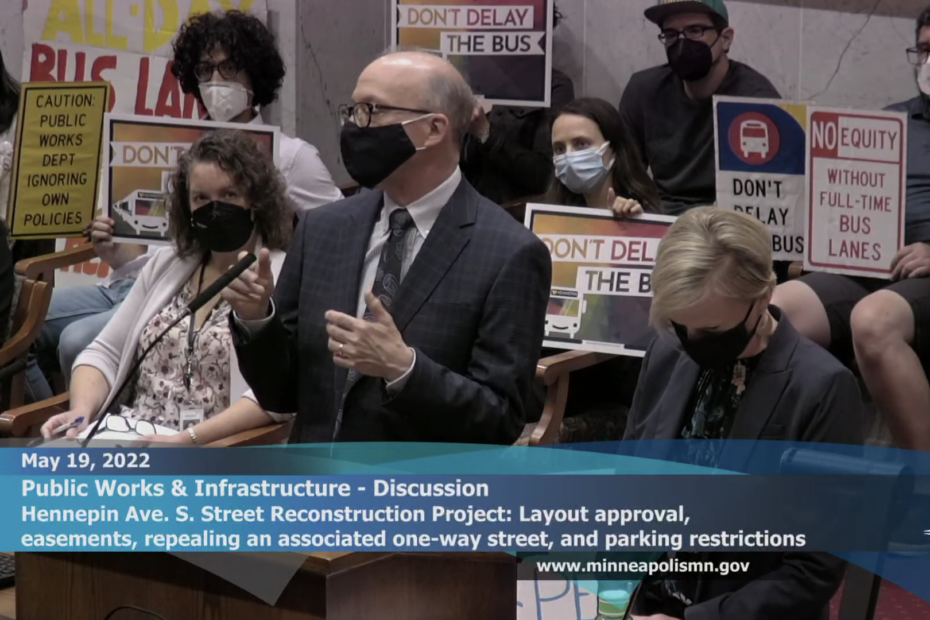 UPDATE 5/25: The Council vote on the Hennepin layout has been POSTPONED from tomorrow, May 26th. This is so supporters on the Council can clarify points raised in the committee meeting last week and lessen the chance of a mayoral veto. It will be discussed again on 6/9 and 6/16. No need for anyone to come to city hall regarding this issue. Thank you for staying ready!

We’ll be in touch with further information as necessary.

The good news: Last Thursday, May 19th the Hennepin layout was approved by a city council committee, complete with all the pedestrian improvements, the bike lane, and full-time bus lanes! Woo!

The not as good news: This Thursday, May 26th it goes before the full city council at 9:30 AM City Council Chambers. And on the issue of the full-time bus lane specifically, it’s going to be a harder path to get a majority of votes than it was in committee.

This means we need you this week!
💛 Contact your council member and Mayor Frey.
💛 Show up if your schedule allows on Thursday, May 26th at 9:30 am to City Hall (350 S 5th St City Council Chambers, Room 317)
💛 Support Our Streets Minneapolis in their outreach efforts this week (scroll down for more details)

Now we count to a seven vote majority
No matter where you think your council member stands on Hennepin Avenue, it’s always worth letting them know where you stand. Thank them for their support as well. Be respectful!

Our Streets has our backs — here’s how you can help
Our friends at Our Streets Minneapolis have stepped up their organizing. In addition to sending that avalanche of emails, you can join them in staving off a potential mayoral veto by doing a couple of things: gathering signatures, and rallying outside the mayor’s office.

A weird new argument to be aware of…
One thing to be aware of that’s hard to capture in a summary: the city’s new Public Works director, Margaret Anderson Kelliher, brought in lawyers from the City Attorney’s Office to argue the City Council doesn’t have the power to designate a bus lane. We think this is wrong, ignores a history of City Council actions to create transit lanes, sets a potentially alarming precedent, and needs to be challenged. This theory essentially says the mayor has the unilateral power to create or remove a bus or bike lane wherever he chooses. We believe full-time bus lanes are part of the layout of the street, which is absolutely under the Council’s control.

Don’t be discouraged. The existence of this argument means the other side is concerned they can’t win on the merits.

It’s really almost over… this is the end… the final countdown
Lastly, we need people willing to show up to pack the City Council chambers and hold a sign on Thursday morning. There won’t be testimony but your visible presence is meaningful! There will be plenty of signs to choose from.